Posted at 15:20h in press review, Rassegna stampa by Fivebikes 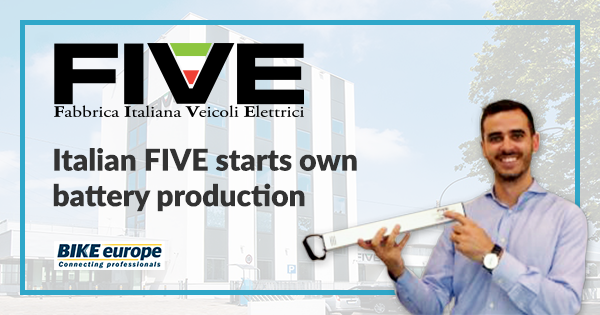 Starting from 2019, FIVE will officially enter the battery market with an in-house production for its Italwin and Wayel electric bikes, and for OEM solutions. All batteries, made exclusively with Samsung cells, will be certified according to the guidelines of the UN Standard 38.3.
The international portal of electric bikes BIKE EUROPE interviewed Fabio Giatti – FIVE AD – who presented the first e-bike battery produced in Bologna factory, explaining that FIVE will produce two different models: for 25 km/h e-bikes, but also for 48V 700 Ah version, for an e-bike that can reach a significant speed.
In the interview, Fabio Giatti also explains the motivation that prompted FIVE to invest in the internal production of batteries. “We are facing increasing logistical difficulties in transferring batteries from Asia to Europe: the automated and industrial production will be able to guarantee high quality standards”.
At the following link, you can read the article published on BIKE EUROPE